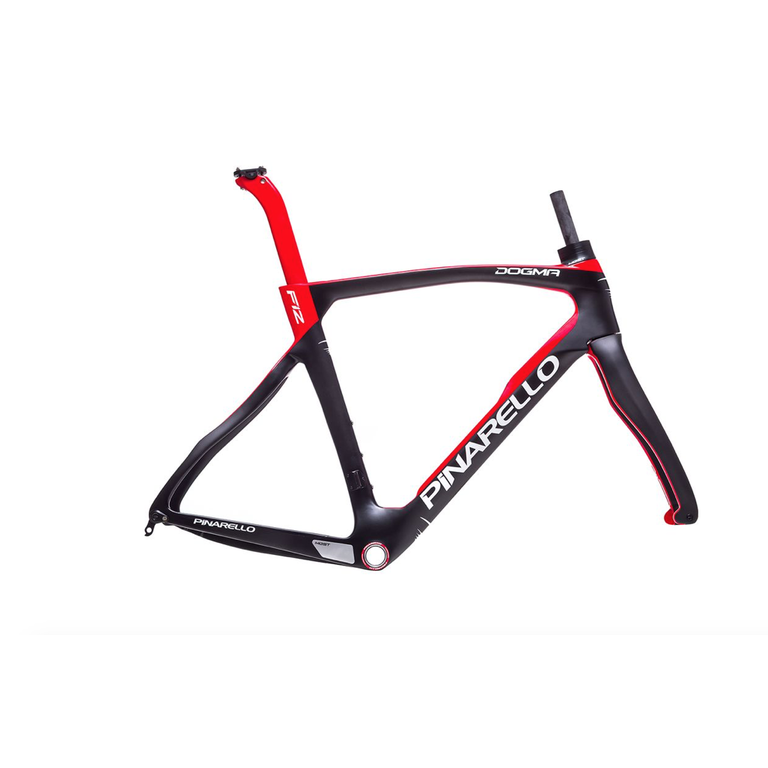 For years, the Pinarello Dogma line has dominated the Grand Tours at the hands of Team Sky. Now, as team Sky turns into Team INEOS, a changing of the guard in terms of the world’s most dominant bike comes as well. The new Pinarello Dogma F12 manages to improve on what many considered the perfect road bike. This Dogma F12 Disk is an all-around warrior that is capable of winning stages of any degree including mountain rides, breakaway flats, and sprint finishes. With the Pinarello Dogma F12 Disk Frameset, you can build up a world-class bike to help you dominate every possible scenario on the road with no compromises.

The F12 is more than just a repackaged version of the F10; this bike improves in every aspect of riding. It is more aerodynamic, saving eight watts of power at 40 km/hour, cutting a second off each kilometer you ride with no additional effort. This improvement comes from a 5 percent reduction in drag with the new Integrated Talon Ultra Handlebar along with a 7.5 percent reduction in drag through the redesigned fork and frame. Pinarello is already known for throwing aero elements into their climbing-focused bikes, but with the improvements in the Dogma F12, this bike is a true all-around gem.
Riders such as Chris Froome and Geraint Thomas rely on Pinarello to give them all the tools they need to achieve World Tour glory. That is why improvement is needed in the Dogma year after year. The Dogma F12 has a 10 percent increase in lateral stiffness at the bottom bracket, making it more explosive than ever. This makes it a more explosive bike that can be relied on to come out on top during a flat sprint. Even the fork twists 40 percent less than previous models during braking. To add to this perk, Pinarello managed to achieve that improvement in stiffness without any addition to weight.

Elite performance does not mean that Pinarello was willing to sacrifice convenience and ride quality. With 13 frame sizes and 16 handlebar sizes, you have 208 combinations to find the perfect fit. Those aerodynamic Talon Ultra handlebars assure that no cables are exposed on your bike. The bars are also compatible with most Garmin, Polar, and Wahoo computers. This version features direct-mount disc brakes which provide greater braking power, calculated modulation, and heat dissipation regardless of weather conditions. This will give you the confidence to push the pace and take full advantage of the speed edge the Dogma has on the competition.

The Pinarello Dogma F12 Disk Frameset gives you nothing short of elite performance on the road.

C$219.95
The new Power Arc Pro saddle expands on the success of our original Power saddle.

C$240.00
The TK1 Tight is our warmest, most protective thermal legwear.